Dops Event Operations LLP is a result of 20+ years of collective and diversified experience, thorough research and a purpose to solve with-in event industry. It’s the story of an event professional who has served the industry for 12+ years in various roles and regions around the globe and is still on. 12+ years of experience; Drafted a streamlined planning process which is easy and proficient during any stage of event lifecycle .

Due to increased corporate involvement, modern demands coming in and expectations are very high from any event. Organisers are going global to achieve the expectations and whole ecosystem of event management has become much more complex. Event organisers are required to identify a wide range of stakeholders, understand their ultimate objective and manage international vendors, venues and other related services while maintaining the best standards to be a successful host. It becomes challenging for organisers/corporates to manage all these stakeholders, vendors and governance without having expert’s support.

Event organisers are required to be extremely organised while organizing international events. They must have clear objectives to be achieved and clear operational & production plan to avoid cross-communications & last-minute surprises which may affect ultimate objective of the event.

DOPS event operations is an initiative to assist You in managing Your projects specially in India and in major destinations around the globe. Success is defined irrespective of size and complexity of the event as we follow customized & highly streamlined project management process and have strong network of partners, venue owners and vendors in India and all major event destinations around the world.

We are your in-house event operations team...

Dops team assists event organizers, corporates & families in organizing exceptional experience for their guests and clients. We assist Government bodies in conceptualizing and executing customized events as per their requirement.

We work as your in-house team to manage all your event requirements irrespective of scale and nature of the event. We have a passion for perfection and an eye for the extraordinary and we achieve the same through our experience, expertise and vision to craft inspiring events.

HOW WE DO IT - the process

Keeping a streamlined track of your event requirements and the arrangements to fulfill them is the key to become the successor, among others.

Dops team believes in immaculate concept and execution plans through step by step process which covers smallest aspect of any event and its ultimate aim to be achieved. We produce detailed Project Plans right from conceptualization to execution by analyzing the main objective/requirement of any event which minimize the scope of contingencies and last-minute failure/changes while executing the event.

Success is defined irrespective of size and complexity of the event as we follow customized & highly streamlined project management process and have a strong network of partners, venue owners and vendors across India.

Event industry is one of the worst affected industry by COVID-19 worldwide. In India, reports mention that event industry is expected to hit by approximately Rs 20,000 crore in Q1 of FY21 (Source). Although, everyone is looking virtual events as the future, but it is a well-accepted fact by the industry experts that virtual events cannot replace the physical events in terms of 1) user experience 2) revenue generation 3) overall impact on the community. So, Where is the future? Let us find out!.

It took a complete month to develop a bare mountain land into the massive venue for this prestigious expo. Around 1,00,000 sqm of temporary marquee tents were used to create exhibition areas, offices, accommodations, control center, food courts & restrooms etc. Other facilities like Helipads, demonstration areas, parking areas & waste management area etc. were developed in an open space of around 1,00,000 sqm.

Defexpo 2016 was the first-ever exhibition that featured live demonstration of armoured vehicles and military systems besides operations by unmanned aerial vehicles (UAVs). The inaugural ceremony saw live demonstrations of military equipment including main battle tank Arjun Mk I and II, various types of heavy bridging equipment, wheeled armoured vehicle, Sarang aerobatics team and Naval LCA. MBT Arjun Mk II and wheeled armoured vehicle were being displayed for the first time in any exhibition. Some 18,000 square metre of space was designated as a special area where tanks, armoured vehicles and specialist equipment showcased live presentations. Several defence ministers from around the world as well as a four star general from the US were present at the event.

Introduction: The Hon’ble President of India being the Supreme Commander of the Armed Forces, once in his/her term, reviews the Indian Naval (IN) Fleet as part of the ‘President’s Fleet Review’ (PFR). This review aims at assuring the country of the Indian Navy’s preparedness, high morale and discipline. Many leading nations of the world use the opportunity provided by the Fleet Review to enhance mutual trust and confidence with their maritime neighbours and partners by inviting their ships to participate in the review. Normally called ‘International Fleet Review’ (IFR), this event then allows the host nation an occasion to display its maritime capabilities and the ‘bridges of friendship’ and trust it has built with other maritime nations.

Event description: The IFR-2016 held during 4th to 8th february, 2016, however, wasn’t just planned as a congregation of armed warships and aircraft. Organizers had designed the event as a multi-dimensional experience – a display of camaraderie and converging interests in a complex maritime environment. Besides the naval ships were reviewed by Honorable President of India Pranab Mukherjee, a nautical exhibition, a city parade, a maritime conference, an operational demonstration, many congregate functions and a book release function celebrating the maritime heritage of India were also planned. This was the project where we had to show our management capabilities to handle as many as 18 different events in the entire city. A total of 95 warships and 70 aircrafts from 50 navies, naval bands from 27 countries and 80 international delegates participated in IFR 2016. Various events were attended by Honorable President of India, Honorable Prime Minister of India, Defence Minister, Chief Minister of Andhra Pradesh Chief of all forces and chief of several countries. International city parade of naval bands from 27 countries held at RK beach road on 7th February 2016 stood as the most popular event among all and was attended by over 200,000 people. 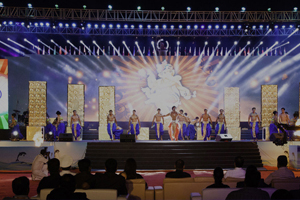